The dark side of Social Media – How to avoid the traps

In the recent decade or so, social media have been dramatically changing the way individuals, groups and organizations create, share, and use information posted online. It is the reach, ubiquity, interactivity and usability of social media that makes almost 90% of Europe’s Gen Z and most of Gen Y embrace social media differ instead of traditional media. According to one survey, in 2017, users spent an average of 2 hours per day on social networks and messaging services. Many researchers and practitioners, marketers in specific, emphasize the “bright side” of social media and the advantages of engagement between companies and consumers. Companies are leveraging the enormous power of social media to boost their marketing, product development, customer service, public relations, personnel decision-making, and other activities driven by exchange of information and engagement with consumers and employees.

According to a survey conducted by Eurostat, almost 50% of all EU used at least one form of social media in 2017, both for the purpose of publishing company content but also for better understanding of the consumer behaviour worldwide through analysis of user-generated content, interactions on social media networks and consumer-generated intellectual property. Nevertheless, an increasing number of social theorists, psychologists, education specialists and legal experts are pointing to the indisputable “dark side” to social media. One of the former Facebook executives recently stated that he regrets that he helped “ripping apart the social fabric of how society works.” This statement ideally portraits the omnipresence of social media platforms and the way they are undermining the freedoms and the well-being of the individuals and communities worldwide. Everyone is familiar with (or have heard something about) cyberbullying, trolling, privacy invasions, fake news and addictive use. In addition, a large number of Britons, aged 14-25 reported that social media, including Instagram, Facebook, Twitter or Snapchat, intensifies self-consciousness and “fear of missing out,” leading to depression, sleep disturbances and anxiety.  In addition to invading our private lives, social media seem to be messing with our work, as well, by creating work-life conflicts. Even though social media executives themselves point to harmful impact of their platforms, users seem to be unconcerned about potential risks and long-term consequences of their choices.

Given that the vast number of employees and customers worldwide belong to the so-called digital natives, the generation which have grown up in a digital environment, with social media at hand, the have become so accustomed to social media that the only reality they know is online engagement, conversations, self-expression or community building. To leverage the undoubtedly enormous power of social media, it is necessary to understand what has brought us here and what is that dark sides of social media that needs to be considered in order to eliminate potential risks and make better-informed decisions.

Referring to the “dark side” of social media is actually, like referring to the negative consequences of many modern phenomena, including entrepreneurship, junk food, capital markets, or the sharing economy, on the individual and society as a whole. In doing this, it is important not to make “black or white” references, like social media is either good or bad, bright or dark, useful or useless. Like with many other technological innovations, social media are not dichotomous, but have both bright and dark sides (think of Alfred Nobel’s dynamite, improving both quarrying, mining, and construction and warfare which capitalized on the use of dynamite). In the similar vein, social media are used to connect to friends and family we don’t see often, but also to disconnect from those we spend our lives with.

The fact is that the new types of interactions and other social media activities, like sharing or conversing, may result in decline in reflective thinking by promoting superficial thoughts leading to moral and cognitive frivolousness. With social media, it is also about the personal perception of their bright and dark sides. A gerontology nurse in a care home in the UK posted a photo on Facebook of herself singing with residents at the care home, considered a breach of privacy, for which she was fired. She considered the posting harmless and well-intentioned, but her employees didn’t. On the other hand, there are cases like that of another Britton who created an online competition and awarded himself and others “pedopoints” for sharing recordings of sexual crimes against minors.

There are also huge discrepancies in the way perpetrators perceive their actions. On one hand, cyberbullying is used to intentionally harm individuals, but oversharing photos of positive experiences and wealth may unintentionally do harm to those who are not so lucky. In addition, technological savviness is required for some actions (like hacking), whereas some actions can be performed by literally anyone (like posting videos online). In their work on the dark side of social media, Kietzmann et al. established the framework comprising the seven building blocks of social media to expand understanding on the way individuals, groups, and organizations can use different social media platforms, but also to describe different features of the social media user experience. These building blocks or functionalities indicate the extent to which users can converse with each other, share content, let others know about their presence, form relationships, know the reputation of others, form groups/communities, and reveal their identity (Kietzmann et al., 2011). Social media platforms are widely using these functions to achieve specific business functions or provide overall business model for the organizations. Each of these building blocks can also be utilized to examine different aspects of the dark side of social media (the key negative aspects or consequences for each of the functionalities are shown in the Picture below). 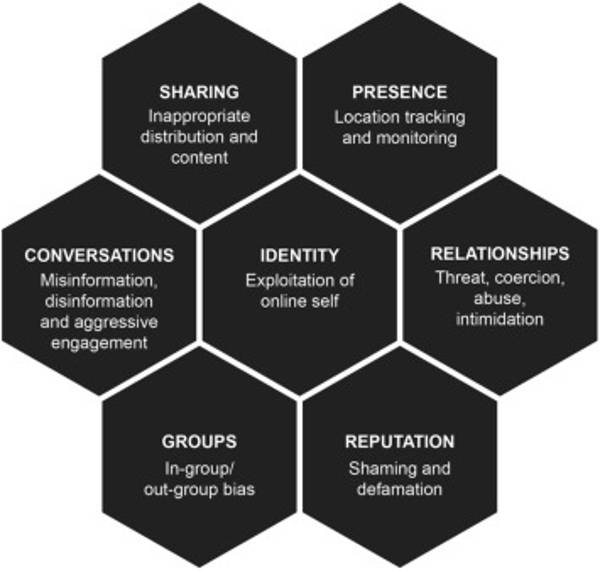 Social media may be improving, but people’s social behaviour online seems to be stalling, at best. Every now and then, it seems as if social media are modifying or even eradicating some of the human traits that make us a social species. Companies wanting to be safe from some of the common traps and risks of social media may find a useful tool in the above framework. Through a detailed analysis of the seven building blocks, being, conversation, sharing, presence, relationships, reputation, groups, and identity, companies can get an insight into the dark side of social media that can negatively affect their brands, customers, and workforce. Nevertheless, more research and more practical understanding is needed to improve the way we use social media and minimize the “dark side” effect. Finally, we do hope that this article motivates you to think about and realize the weight of the long-term consequences of the inadequate and unethical use of social media. You gotta lot to win, but a lotta loose, as well!

You Gotta Speak the Language of Your Customer...

You Gotta Speak the Language of Your Customer...

How to Become Digitized When Everything's, Ac...

How to Become Digitized When Everything's, Ac...

10 Steps to Digitize Your Business

10 Steps to Digitize Your Business

A Social Media in Need is a Friend Indeed

A Social Media in Need is a Friend Indeed